The GP250 Road Racer was developed after a long period of inactivity in the Grand Prix race since 1967.
However, it seems that it was not yet a machine that could compete with “Kawasaki KR250” and “Yamaha TZ250” on an equal footing.

This is an image of the existing RSC Honda RS250R sent by Mr. Comstar.

RCB color is applied to the car body that kept the original appearance.
The brake is a double disc with CB400N parts.

The full-scale RS250R, which can compete with rival manufacturers’ road racers, is
from the 1984 model after the two-wheel racing division was reorganized into “HRC / Honda Racing Corporation”.

It is a water-cooled 90-degree V-twin piston reed valve engine that
was developed at the same time as the commercial vehicle “Honda NS250R / F”.

It wasn’t “Time is Sengoku, the battle of Sekigahara”, when the aftermath of the HY war remained.
At that time, he entered the All Japan GP250 in 1984 as a rival to the “Yamaha TZ250,” which had the appearance of a one-make race.
Several teams including Works have participated in the race, and the specifications have changed rapidly within half a year.

The initial development model of the RS250R, which first appeared in the ’84 All Japan Round 2 Tsukuba.
Double cradle frame with aluminum square pipe.
F16 inch tires. Exhaust pipe divided into front and rear.
It has almost the same specifications as the NS250R on the market.
This is the machine of Akira Sakaguchi / MOTOR HOUSE RACING DIVISION.
Dai Kobayashi / TEAM HRC’s ’84 All Japan Champion Machine is also based on this.

Several teams have participated in the World GP from the 3rd round of the Spanish GP.

R. Freymont / Parisienne RS250R. After all the exhaust pipe is divided into upper and lower parts.

Suzuka Japan GP in 1984: Takao Abe, who was the development rider of HRC / TEAM HRC exclusive Honda RS250R
twin tube frame with eye-shaped cross section. At that time, it was called “ULF / Ultra Light Frame”.
F17 inch tires. Exhaust pipe for front exhaust of both cylinders.
This is the final specification for commercialization from the following year.
By the way, it was Takao Abe who decided the first victory of Honda RS250R with this machine. 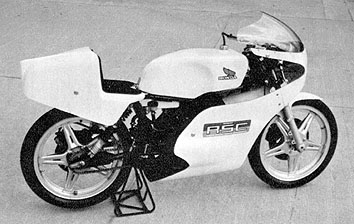 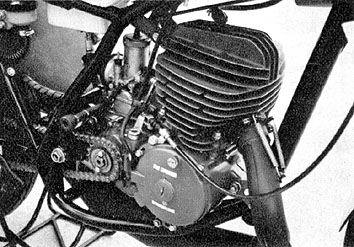 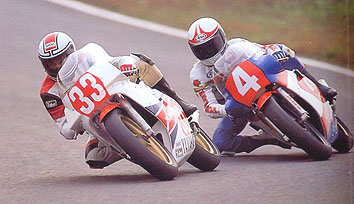 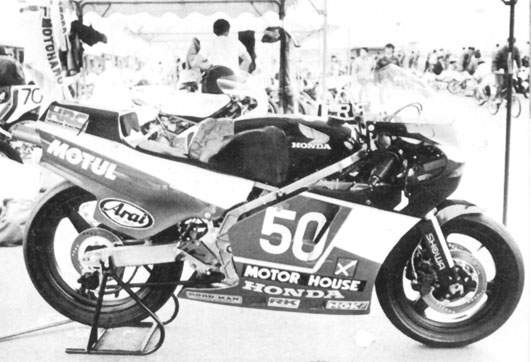 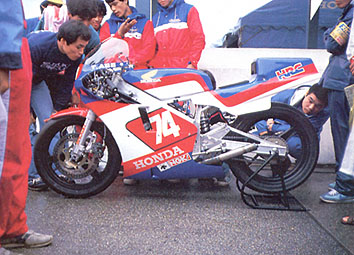