“NF5” which became a crankcase reed valve engine. It is based on the special “Honda RS250RW ” when Freddie Spencer won the 250/500 double championship in the 1985 WGP. Chassis of “Honda RS250RW” was exclusively developed for Spencer.

A 90-degree uniaxial V-twin engine with a crankcase reed valve that shares parts and layout by dividing the engine of the 1985 500cc champion machine “Honda NSR500 (NVO TYPE2)” in half vertically .

The frame also adopts an alignment that emphasizes standing up, incorporating the design concept of 500. It is almost completely incompatible with the commercially available 1985 “Honda RS250R”.

The semi-circular hole that looks like a seat cowl allows you to operate the cab, such as pulling a choke. The right two-out chamber seems to be a specification that can be seen only in this 1987 model.

From around this time, the use of aviation fuel (research octane number 101) called “AV gas (avgas / aviation gasoline)” became common.
Engine performance has become sharper year by year, and catalog data and other data have become famous and innocent. The wheel width will also increase year by year with the spread of radial tires. Expensive optional items such as “AV gas head (high compression cylinder head compatible with AV gas)” and “AV gas chamber”
made in Italy with lightweight magnesium wheels (Technomagnesio commonly known as Techmag and Marvic) are available according to the ever- increasing technology.

You can see the link of the exhaust device “ATAC” operated by the centrifugal governor. Carburetor, 85 years type “RS250RW” in
two twin and forced closure of the magnesium body
did things that conform to the “Honda NSR500” that,
conventional ones of a single argument in the image of the 86 model
year, in the 87-inch It has changed to a PJ flat valve.
It seems to be a cost-priority process for supplying to a large number of work sliders.

It was a common practice for GP riders at the time to equip the 1988 RS250R rear with Mavic 17-inch wheels and Michelin radial tires.

The exhaust device has been changed from a sub-chamber type ATAC to a
variable timing “RC (Revolutionary Controlled) valve”.
The drive power supply was a NiCd battery.
The shape of the seat cowl is similar to the NSR500 after ’87.
The Nissin F-brake is a new type of open type. 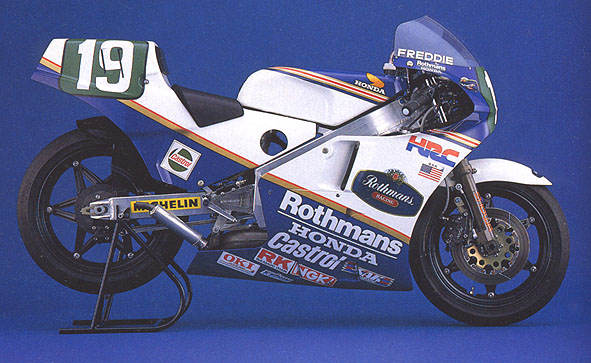