“NX5” which was fully remodeled for the first time in 6 years. The direct development base was the newly developed “Honda NSR250” , which Luca Cadalora won the WGP championship in 1992 .

generator is an inner rotor
Gasoline tank with ram air passage
Carbon F brake rotor, special plated F fork and other
special parts Although it stands out, you can see that
it has basically the same structure as the NX5 series “Honda RS250R”.

It has been updated to the almost perfect 1992 NSR250 replica, except for the difference in materials.

The V bank of the cylinder has changed from 90 ° to 75 °, and all engines with a uniaxial balancer have been newly designed. Comprehensive measures such
as shortening the length of the intake pipe by tilting the rear cylinder forward, shortening
the total length by narrowing the space between each axle, and increasing the thickness of the gear and the capacity of the cooling system in preparation for further power-up.
It seems that it has been reviewed.

The layout of the engine is the same as that of the previous machine, and it is flipped horizontally like the back burn in the photo.
Therefore, the clutch is on the left side and the drive chain is on the right side, which is a rare shape.
However, the pedal arrangement of right R brake and left shift seems to follow the current mainstream layout.
For Harley and Ducati, it is extremely rare to have such a layout on a Japanese-made motorcycle, and as to
why this is the case, the magazine once said,
“The total length of the shift shaft can be shortened, which improves quantification and reliability. There was a commentary saying.
Theoretically, I was convinced, but I wasn’t surprised at the cases that are rarely seen in either “GP500” or “Superbike”.
The rival maker changed to a uniaxial V-twin layout and started to increase the potential, so was it
a manifestation of “Hondaism” trying to gain further advantage by doing something different from others?

It seems that the main tube of the frame has been changed to a modified cross section.
The swing arm has also been changed to “PRO ARM”, which has a proven track record in endurance racers such as “Honda RVF750” and “Honda NR750”.

The “NX5” has very few “hardware” changes compared to its predecessor, the “NF5”.

There was no direct effect on the Honda RS250R, which is a commercial racer, but from
1994, the octane number of gasoline that can be used at GP
was limited to the equivalent of AV gas that can be purchased normally at airfields.
As
a result, the advantages on the engine side of the Works Machine Honda NSR500 and Honda NSR250 have been slightly reduced.

From the 1995 model, it seems that the setting of the suspension at the time of shipment
has become less uneasy even at a slow pace, which is closer to the level of racer machine beginners from the one suitable for experts until then .
In addition,
the outsourcing rate of parts has increased , with F brakes made of “brembo” cast iron discs in Italy and driven sprocket made of British “Renthal”.

Since 1997 (from 1998 in WGP?), Leaded high-octane gasoline such as race gas AV gas has been banned, so
it seems that the specifications of the engine and chamber have changed due to lead-free measures.
The “Ram pressure intake system,” which was adopted early on, is now standard equipment on the “Honda NSR500.”

From the 1999 model, the carburetor is
equipped with an electronically controlled PWJ (power jet) and TH sensor (throttle sensor).

It seems to be a refined version of the works specification carburetor included in the “A kit”. A mechanism that cuts
the gas supply to the PWJ (power jet) with a
solenoid valve at any of the rotation speeds of 12.750 / 12.500 / 12.250 .
It seems that the setting is changed by replacing the coupler of the ECU.
Is the throttle sensor used to correct the ignition advance?

It seems that the rim width of the front wheel has been narrowed to 3.5 inches.
Is the wheel outsourced from the 2000 model? 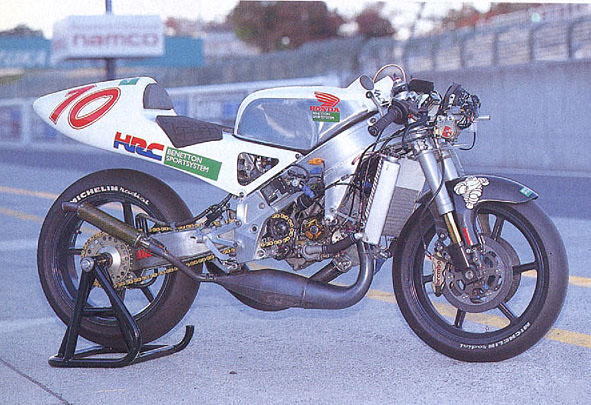 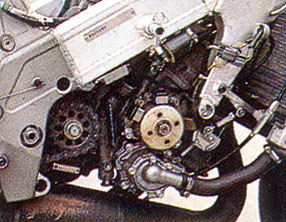 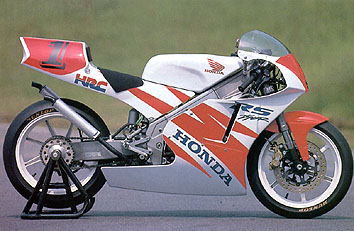 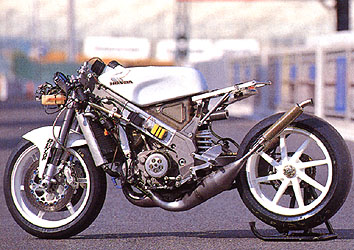