Around this time, at the World GP125, which was being contested by two-cylinder engines, regulations were announced after 1988 that the engine used was only a single cylinder. For this reason, HRC introduced the RS125R to the GP125 ahead of schedule from 1987, one year earlier, and examined and matured its performance in actual battles. In 1988, when the new regulation was implemented, it set a new purpose to make it a winning machine.

The 3rd generation RS125R (model NF4), which appeared in the full model change in 1987, was given the ultimate concept of a commercial road racer, “a machine that can win the world GP”.

Until then, the RS125R had evolved based on the CR125M steel frame, and was already a large body for the 125. For this reason, it has become essential to reduce the size of the vehicle body through a new design. Therefore, the aluminum ULF (Ultra Light Frame) used in the 1985 NSR500 and RVF was adopted for the frame.

However, since it was the first small displacement GP machine, there was no data and no one had participated in the GP125, so the body layout had to be considered from scratch. The 125 engine is small and can be laid out anywhere on the car, so to speak. Where to install the engine ── The solution to that problem was not the 125, but the idea of ​​making it the same as the small displacement GP machines of the time, such as 50 and 80.

Since it is equipped with a single-cylinder engine, it does not require left and right volumes like a two-cylinder machine, and above all, there are few restrictions on weight. If so, how about a machine with a high center of gravity, where the engine position is high and the rider rides face down.

If you raise the center of gravity so that the machine can react to the delicate movements of the rider and corner, it will be a machine that can run even in the corners, and a small displacement machine that wants to stand up in the corner without reducing the speed and engine rotation as much as possible. Isn’t it the ideal performance?

The finished machine had a high ground clearance, and the rider crawls back and forth, making it a “thin” machine. At the prototype stage, the rider’s elbow, which was laid down on a straight run, hit the upper end of the crankcase. The RS125R’s unique front and rear elongated body form has been completed.

Users will be pleased to be able to reduce race costs if the parts can be reused and the choices are wide. Even at dealers, it is desirable because it is an advantage in order to reliably sell commercial road racers with a small market.

In other words, in the development of commercial road racers up to that point, it was a rule of thumb to follow the conventional route, and it can be said that it was taboo in a sense to dramatically change the content. However, the 1987 RS125R (NF4) has undergone major changes, including the frame, in order to improve its potential as a racing machine.

In that case, spare parts etc. cannot be diverted from the previous year’s model. Initially, some retailers were very opposed to this. Continuing to persuade him, “In order to survive as a powerful commercial racer, we need an opportunity to make major changes in anticipation of 10 years ahead. This time, we want to make a machine that can win the GP.” Was another big job.

There were also problems with mass productivity and cost. The 1987 RS125R = NF4 was planned to be deployed at the global GP and delivered in Europe, so it had a plan to increase production by 1.8 times from 430 units in the previous year to 770 units.

For this reason, the production was transferred from the HRC facility in the Suzuka Circuit to Honda’s Hamamatsu Works, but in order to achieve both mass productivity and accuracy guarantee as a racing machine, the assembly is different from the commercial car. -It was necessary to design a production line that realizes processing.

In terms of cost, we introduced a new aluminum material that began to appear on the market at that time, and adopted a rear suspension that was a direct push type cantilever with a simple structure instead of Prolink ── Thus, the RS125R was sent to the GP. The era of immovable existence will begin.

1987. World GP will be held in Japan for the first time in 20 years. Five classes are held in the All Japan Road Race Championship, and among them, the number of users of the NSR250R, a commercial vehicle released in the previous year, has increased explosively in the F3 class. Literally an unprecedented race boom was coming.

The introduction of the RS125R GP was Honda’s first GP participation in 21 years since the RC149 in 1966. For the rider, Italian Etchio Zianora, who was active in GP125, was adopted.

As expected, Gianora realized an outstanding and speculative run by lying down so that the body could not be seen from the front and plunging into the corner as it was. Although he couldn’t compete with two cylinders on the straight, he sewed between other machines in the corner and suddenly finished 6th in the debut race, which surprised the spectators and the people involved.

After that, Gianora accumulated points in the second half of the race, such as taking second place in the sixth race, and finished the first season in sixth place in the ranking. I couldn’t win, but the result was good.

That said, the GP walls that Europe had built endlessly were not so easy to break. In this year, which is the first year of the single cylinder, RS125R and Zianora won the first victory, but Derbi of Spain, a small displacement specialist who has shifted from GP80, stopped, and Zianora could only win two. However, the ranking went up to 2nd place.

Also, from this year, Hisashi Uemoto and Takaji Takada started full GP125 participation by a private team with RS125R. Although he did not win the race in this full race, he proved that it was possible for Japanese to win the top prize, and it was an opportunity to turn the eyes of many Japanese riders to the world.

Then, in the opening round of 1989, the Japanese Grand Prix, GP125 was held for the first time in 23 years, with Zianora winning, 2nd place Uemoto, 3rd place Takada, and Japanese RS users monopolizing up to 10th place below. However, the battle became chaotic this year with the addition of JJ Cobas, Aprilia, and the well-established Garelli, which had completed the development of a single cylinder.

As a result, the rider champion was won by JJ Cobas, but in addition to Gianora, the RS125R driven by small displacement veteran Hans Spaan won 6 out of 12 races, and it has been Honda’s third year since 1966. Achieved the GP125 maker championship for the first time in 22 years.

And in 1990, Spawn, Doriano Romboni, Loris Capirossi and others riding the RS125R, which had undergone major improvements in the suspension, fought for the championship, and Capirossi finally led the RS to the championship. The overall winning percentage was 11 wins in 14 races, and the top 5 in the ranking were monopolized.

RS left an overwhelming result in the 4th year of participation and became an existence that “GP125 can not win unless it is RS”, and it became a stepping stone for Japanese riders to participate in GP ── Japanese riders and GP It was just after this that the turning point of Japan came.

In the opening round of the 1991 Japanese Grand Prix, Noboru Ueda decided to win the electric shock, beating champions Capirossi and Fausto Gresini. The first GP victory as a Japanese on the RS125R was a ticket for full participation. Since then, all-Japan top riders such as Nobuyuki Wakai, Kazuto Sakata, and Takeshi Tsujimura have participated in the GP full race one after another.

This movement eventually evolved into a movement in which many Japanese riders, including most experienced all-Japan champions, participated in the full GP, and eventually the number reached 22. This was a revolution for the Japanese racing world.

At the same time, it will lead to the participation of the leading Japanese constructor who handles their machines in the GP, and Japanese riders and teams will build a big force in GP125. The GP, which had been visible in the distance until then, became a daily scene for them.

In addition to the potential of the RS125R as a commercial road racer, I would like to mention that there was detailed support from HRC, which expanded the range of activities of the constructor.

For example, in the engine development of RS125R, considering a long span of about 10 years from one complete design change, it is constantly evolving little by little without making extreme tuning or change that puts all the technology into the full model change.・ I have improved it.

By doing so, it will be possible to further power up the engine by leaving room for tuning in the aftermarket and adding cylinder processing and intake / exhaust system changes after purchase. That broadened the scope of the constructor’s business and at the same time made the competition in the race even more exciting-that’s why Honda didn’t put a works machine in the GP125 or All Japan 125.

The tuning kit parts supplied by HRC played an important role. The kit parts consist of a cylinder head, a cylinder, an exhaust chamber, and an ECU. The HRC-managed cylinder kit with an exhaust valve is called the A kit, and was supplied to a leading European team as a real works part.

Then, based on the sand-shaped blank (cylinder before processing) of the cylinder provided by HRC, data, and technical guidance, the cylinder manufactured and sold by each constructor has been handed over to many privateers in Japan and overseas as a so-called B kit. It was.

It is a culture of racing in Europe and the United States that constructors and parts makers carry out their own tuning and parts development, and Japanese constructors have expanded their chances of playing an active part in GP and all Japan by tuning RS125R.

Introduced in 1987, the NF4 has undergone unprecedented frequency of improvements and specification changes every year, but has fought eight seasons until 1994, winning three rider champions and the sixth consecutive manufacturer champion. The fact that an average of more than 1000 units were produced annually and about 1500 units were produced in 1991 shows its overwhelming support. 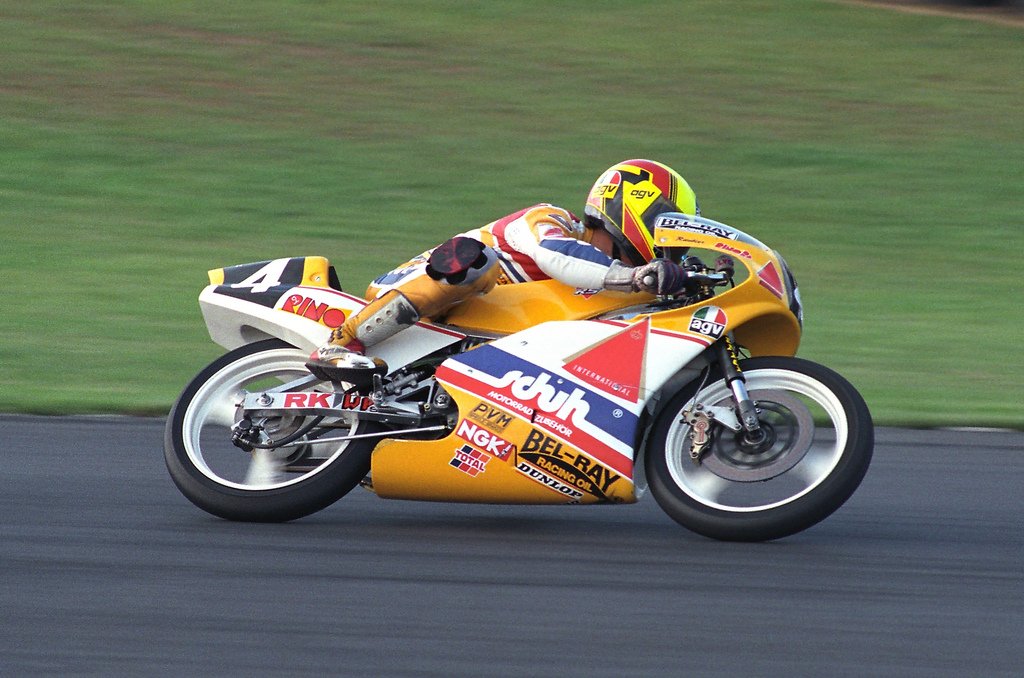 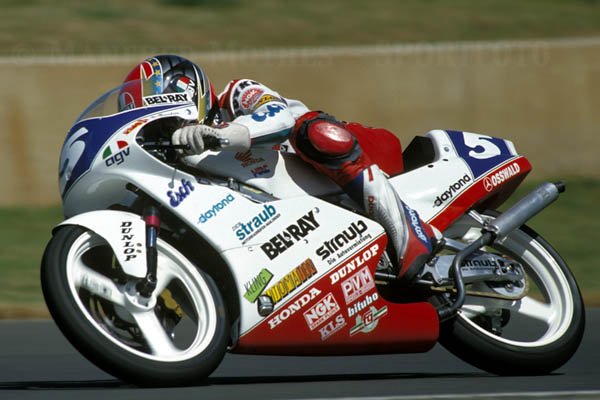